Recently Rastogi et al have reported the infrared spectra of o-amino­benzonitrile in solid phase. As the compound was highly fluorescent, its Raman spectra could not be recorded and hence the assignments made by them could not be compared with the Raman data. Therefore, in order to have a consistent interpretation of the vibrational frequencies of this molecule, we have recorded the IR spectrum of this compound in vapour phase and the results are reported in the present note. The IR spectrum was recorded with Jasco spectrophotometer model FTIR/7000 by warming the powder substance in a variable T cell and warming the KBr windows of the cell to avoid condensation of the gas. About 0.5 g of the substance (H2NC6H4CN; FW 118.14; mp 47-49°C; bp 267-268°C) was introduced in a 10 cm quartz cell with KBr windows, which was evacuated and sealed and temperature was controlled by two thermocouples. The IR spectrum is shown in fig 1 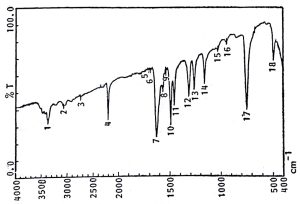 Out of total 39 normal modes of vibration of this molecule, only 15 modes could appear in the vapour phase. Further, a comparison of the observed vapour phase spectrum with the spectra in the liquid or solid phase shows that the frequency or band width of most of the bands observed does not change markedly in the vapour phase. An attempt was also made to record the laser Raman spectrum of the substance by varying the laser powers, but it was not worth mentioning. The assignment of the observed bands (Table 1) are in agreement with the data available for related molecules. 1,3 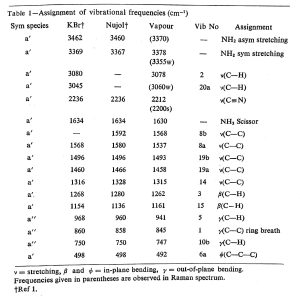