This short summary of Dr. Francis Yu’s career is adapted from my nomination of Dr. Yu for the Emmett Leith Award from the Optical Society (OSA).  Dr. Yu was the recipient of this prestigious award at the Frontiers in Optics (FiO) Meeting in Rochester, New York, on October 19, 2016 during the 100th anniversary of the OSA. 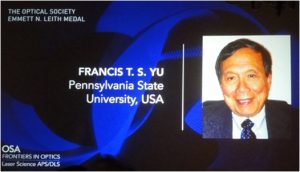 In the late 1940’s, a new era in optics dawned with the discovery of holography by Dennis Gabor, a Hungarian born physicist working in England. Thereafter, Emmett Leith, along with Juris Upatneiks, did their seminal work on optical processing and holography in the 1960’s at the University of Michigan, as an extension of the research on synthetic aperture radar at Willow Run. Many years later, Emmett Leith obtained his Ph D under the supervision of Dr Yu from Wayne State University in 1978 with the dissertation titled “Origin and development of the carrier frequency and achromatic concepts in holography” [1].  Dr Yu and Dr Leith had known each other for a long time and kept up their friendship for decades till Dr. Leith’s untimely demise and, indeed, would have worked together on common (classified) projects in the 60’s had Dr Yu been a US citizen then.

Dr Yu graduated from Electrical Engineering (EE) at the Mapua Institute of Technology, Manila, the Philippines, in 1956.  He received his M S  and Ph D in 1958 and 1964, respectively, both in EE from University of Michigan.  While at Michigan, he was also a teaching fellow, instructor, and lecturer.  From 1966 to 1980, he was an assistant, associate, and full professor at Wayne State University.  Since 1980, he was Professor of EE at Pennsylvania State University.  In 1985, he became the director of Center for Electro-Optics Research and an Evan Pugh Professor, the highest rank conferred to faculty at Penn State.  He retired from Penn State in 2004, and since then he is an Evan Pugh Emeritus Professor.

Dr Yu is world renowned for his work on optical signal processing, holography, photorefractive devices, and fiber sensors.His numerous research accomplishments include white-light signal processing, optical processing with partially coherent light, one-step rainbow holography, development of new algorithms and architectures for Vander Lugt and joint transform correlators, optical computing, and optical neural networks, optical processing using photorefractive crystals, and photorefractive fiber holograms.  He has published more than 300 high quality refereed papers and more than 180 conference papers in these areas.  He is the author of 9 books on holography and optical signal processing, and also has many invited chapters in various monographs and books, such as in Progress in Optics (two volumes), Encyclopedia of Physical Science and Technology (two volumes), and Trends in Optics.

Dr. Yu has served and continues to serve as chair of numerous conferences, conference program committees and editorial boards of journals. He is Advisory Editor of Asian Journal of Physics. He has given approximately 300 invited talks at universities and organizations in over 30 countries.  He has also been consultant to many industries and US government organizations such as Bendix, GM, Physical Optics Corp., Wright-Patterson AFB, NASA, and JPL.

Dr. Yu is Fellow of OSA, SPIE, and IEEE, and recipient of SPIE’s Dennis Gabor Award (2004) and IEEE’s Donald B. Fink Prize (1998).  Amongst his many other awards, it is notable to mention the Faculty Scholar Medal for Outstanding Achievement in Physical Sciences and Engineering (1983), the Outstanding Researcher Award in Engineering (1984), the Engineering Society Premier Research Award (1993) from Penn State, and the Creative Development of Technical Innovation (1995) from JPL-NASA.

I am fortunate to be amongst the numerous individuals Dr. Yu has inspired, which include his students who have all gone on to assume responsible positions in universities, industry and government worldwide.  His simplicity, humility, and selfless dedication to science should be obvious to anyone who has had the opportunity to be with him.

On behalf of all his colleagues and students, it is my honor to state that Dr Francis T S Yu, a friend, colleague and dissertation advisor of Dr Leith, received the Emmett Leith Medal “for his life-long important contributions to holography, white-light holography, partially coherent signal processing, optical correlators, and information optics”.

Bioluminescence emissions of female fireflies of the species Asymmetricata circumdata

Innumerable scientific studies have been carried out for over a century on the enchanting light of different species of fireflies. Almost all those studies have been performed on male specimens of fireflies; there has been no detailed study on bioluminescence emissions from females. Here we present a study on the light of female specimens of the Indian species of firefly Asymmetricata circumdata (Motschulsky). Steady-state spectra recorded in a high-resolution spectrometer show the peak wavelength at 565 nm, which is different from the one recorded for male specimens of the firefly-species. Time-resolved spectra show the pulses to be combination ones. Diffraction pattern of this light in a grating shows the central principal maximum to be of color yellow which narrows down considerably in the first and second orders, while green and red color-sectors appear in the first order and become wider in the second one. © Anita Publications. All rights reserved.

Bioluminescence emissions of female fireflies of the species Asymmetricata circumdata.pdf

Experimental status of research on atomic frequency standards in India

Toward Sustainability in Organic Electronics: A Performance Check for DNA

Complexes as Dielectric Layer in P3HT based OFET

Laboratory for Molecular Photonics and Electronics (LAMP), Department of Physics,

Notwithstanding its manifold advantages the fast emerging area of organic electronics can invariably lead to the production of huge amounts of plastic waste and therefore developing ecofriendly organic electronic components to make it sustainable has become a priority task. Here an effort has been made in this direction where in a well-known bio material complex of deoxyribo nucleic acid and cetyltrimethylammonium chloride (DNA_CTMA) is applied as dielectric layer in a top-gate organic field effect transistor (OFET) with Poly 3-hexylthiophene (P3HT) as channel material. The DNA used was isolated from the leaf of Asteracea species plant by the biosynthesis mechanism. The device returned modest but promising operating parameters. © Anita Publications. All rights reserved.

We report here the compositional dependence of parameters like electronic polarizibility, magnetic susceptibility and energy band gap of some mixed ternary II-VI compounds using correlation process and discussed the lattice matching condition for obtaining useful crystals together with the potential of InP/ZnCdSSe, CdS/ZnCdSSe quaternary alloys for useful devices. © Anita Publications. All rights reserved.

On the correlation and analysis of some useful optoelectronic properties of mixed II-VI compounds.pdf

Computerized Glow Curve Deconvolution (CGCD), a technique that has its origin to an international venture for intercomparison of glow curve analysis, is accepted by the entire community of thermoluminescence (TL) workers. The technique is nothing but curve fitting of complex TL curve often consisting of number of elementary peaks following no uniform mathematical description even for the same material. Therefore it is not just curve fitting. One needs to test the goodness of fit following the prescribed rules of statistics.
In this communication we present the Glow Curve Deconvolution (CGCD) of D2O ice, a novel material by all standards to show that the complex TL curve can be fitted with FOM ~2% with parameters having sound physical basis. It is to be noted that as many as 10 TL peaks in D2O ice have been identified along with their activation energy (E) the key parameter of defects in all semiconductors/insulators. © Anita Publications. All rights reserved.
Keywords: CGCD, TL, D2O ice, FOM.