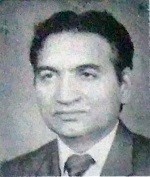 It is well known that Raman spectroscopy which is based on the phenomena of inelastic scattering of light is a highly specific non­destructive technique of investigating the molecular species in all phases of matter. The Raman spectroscopy is undergoing rapid developments owing to the impact of lasers, new detectors. interferometers and computers. The availability of laser light source, for excitation of Raman scattering and the developments of instrumentation have greatly stimulated interest in the use of Raman spectroscopy. Many applications have been developed during the past decade. FT-Raman spectroscopy employing NIR lasers. and its efficiency in data processing, has resulted in Raman spectroscopy becoming a tool of research as a result of which many new phenomena are being discovered and studied. Raman was aware of the potentiality of his discovery. In his Nobel lecture he said, …the new field of spectroscopy his unrestricted scope in the problems, relating to the structure of matter. We may also hope that it will lead us to a further understanding of the nature of light and of the interactions between light and matter”.
Considering the immensity of significance of Raman spectroscopy as an indispensable tool for research in interdisciplinary fields encompassing almost all branches of science, we thought of devoting one of the issues of AJP to Raman spectroscopy ab initio.

We requested Prof W Kiefer, to edit this special issue on Raman spectroscopy. He accepted our request inspire of his busy schedule. however asked us to wait for some time. In the mean time, on my request. Prof G D Baruah, President Physics Section. ISCA (1998-99) invited him to deliver a general lecture at 85th Indian Science Congress, which was scheduled to be held at Hyderabad. India. during Jan 3-7. 1998. He accepted the invitation of Prof Baruah to deliver the lecture and wrote me in Sept 1997 that he will now find time to edit special issue. But nothing was certain before his visit to India in January 1998. Finally, during his visit to India he told me about the progress of the proposed special issue. We discussed many points in regard to this issue as well as on the subject and decided that AJP Vol 7. No 1 1998 would be the special issue on Raman spectroscopy.

With all my heart. I thank Prof W Kiefer for taking pain to edit this issue and I am happy to present this issue to readers.

We are grateful to all those authors who submitted their manuscripts in time. The issue is prepared directly from the manuscripts edited by Guest Editors, except in a few papers where we have made minor corrections. It is our hope that the issue will interest to readers.

This is a Special Issue of the Asian Journal of Physics which celebrates the seventieth anniversary of the discovery of the “Raman Effect” by Professor Chandrasekhara Venkata Raman at the Indian Association for the Cultivation of Science at Calcutta, India. In the seventy years that have elapsed since the discovery of this new scattering phenomenon of a fundamental character, the field of Raman Spectroscopy has grown enormously and continues to grow, encompassing a wide range of topics and applications in physics, chemistry, biology, biochemistry, medicine, pharmacy, environmental sciences and even in technology and art.

Encouraged by the editor-in-Chief of the Asian Journal of Physics, Professor V K Rastogi, I have sent letters to leading scientists engaged to the Raman effect and related topics inviting them to contribute original papers to this Special Issue. It is indeed gratifying to note that several distinguished Raman spectroscopists have graciously responded to my invitation inspite of the short notice given to them. I wish to express my grateful thanks to all the authors in particular for their cooperation in meeting the various deadlines imposed by a Special Issue. I am very grateful to them as well as to Professor V K Rastogi for his encouragement and cooperation.
The Special Issue begins with an article, which emphasizes the most essential quality of Raman-his single-minded devotion to science as revealed by Nature. With the 21 original papers that follows, the Special Issue tries to present a glimpse of some of the recent investigations in vibrational analysis and studies of molecular structures, of biological and biophysical studies, of investigations in physics including several studies of thin films, of excited states, pigments, and surface enhanced studies. The last two papers are devoted to nonlinear Raman effects and Raman tensors.

By their contributions, the authors have helped to highlight the wide and varied spectra of activity based on the Raman effect. It is my hope that this Special Issue will be found useful by the scientific community which cherishes the ideals and memory of Professor Raman.

FTIR and Raman spectra of 2,4-difluorobenzonitrile

FTIR spectra of 2,4-ditluorobenzonitrile were recorded in KBr pellet and Nujol mull in the region 200-4000 cm-1 on a Nicolet DX spectrometer and in liquid and vapour phases on a Jasco FTIR/7000 spectrometer. Raman spectrum was recorded in the region 50-4000 cm-1 on a Jasco K-500 spectrophotometer using the 488.0 nm radiation from an argon ion laser. The observed vibrational frequencies were analysed and assigned to different normal modes of the molecule. Ab initio and density functional calculations were performed to support our frequency assignments. Specific scale factors were deduced and employed in the predicted frequencies. The geometry structure was determined and several thermodynamic parameters were also calculated.

FTIR and Raman spectra of 2,4-difluorobenzonitrile…Download

We report the results  of Raman measurements at pressures up to 40 GPa of molecular compounds Ar(H2)2  and CH4(H2)2 with similar Laves phase structures. We discuss here the rich hydrogen vibron spectra arising from site and vibrational (Davydov) splitting in these materials. The   CH4 compound (in contrast to that containing Ar) reveals substantial site splitting, which we explain by the anisotropic nature of the crystal field produced by methane molecules. We find that the observed number of the vibron sidebands at high pressures are inconsistent with the Laves phase in the case of the CH4  compound, which is attributed to lowering of its symmetry at 7.2GPa. The results are compared with synchrotron X-ray and infrared measurements.