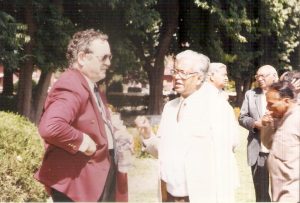 Wolfgang Kiefer one of the most distinguished Raman spectroscopists will celebrate his 75th birthday on February 12, 2016. It gives us great pleasure to dedicate him on this occasion the 2nd issue of 25th Anniversary of Asian Journal of Physics (ISSN 0971-3093).This anniversary issue contains eight contributions by friends, colleagues and former students of Wolfgang Kiefer. The contributions nicely feature the broad range of Raman spectroscopic approaches and their broad applicability.

Wolfgang Kiefer worked throughout his impressive scientific career for the further development of Raman spectroscopy and its application towards new scientific fields. Raman spectroscopy fascinated Wolfgang Kiefer already as a diploma and PhD student and was a solid companion throughout his scientific career. Wolfgang Kiefer developed and applied a great number of Raman approaches to unravel the structure of molecules in the gas, condensed and solid phase and on metal surfaces. In addition, the ultrafast dynamics taking place within and between these molecular systems took center stage of his scientific work.

Wolfgang Kiefer was born in 1941 in Pforzheim, Germany. He studied physics in Munich. After his PhD in 1970, he went for postgraduate studies to the National Research Council in Ottawa, Canada where he stayed for two years. He subsequently returned to Munich where he finished his habilitation in 1977. Between 1977 to 1984, Wolfgang Kiefer was a Professor in Bayreuth, Germany and from 1985 to 1988, he was appointed as full professor of Physics at the University of Graz, Austria. In 1988, he received a call for the chair for Physical Chemistry at the University of Wuerzburg, Germany, which he accepted. He stayed in Wuerzburguntil his retirement in 2006. Wolfgang Kiefer graduated 85 PhD students among them are twelve who also successfully pursued an academic career as Professor. The Kiefer Raman labs were throughout his scientific career an extremely popular meeting place, hosting a large number of friends and colleagues as well as students of many different countries who always have enjoyed the fruitful and also pleasant stays in the Kiefer group.

It is impossible and would go much beyond this brief editorial to comprehensively summarize the scientific achievements of Wolfgang Kiefer, which are published in 865 (!) publications. In the following, just some key words of his groundbreaking research are listed:

Raman spectroscopy has matured to become one of the most important laser spectroscopic methods and has found its way into almost all natural sciences. Raman spectroscopy has become an indispensable analytical method for physics, chemistry, mineralogy and also recently for the life sciences and medicine.It is not exaggerated to say that the work of Wolfgang Kiefer significantly contributed to this success story of Raman spectroscopy. It is too bad, that the inventor of Raman spectroscopy the great Indian scientist CV Raman is not able to witness the scientific impact his invention had and more importantly will still have even after more than 80 years of its discovery. However, he would be definitely very proud of what his “Raman followers” like Wolfgang Kiefer achieved and how they utilized his invention.

It is no surprise and more than deserved that Wolfgang Kiefer was awarded with the Raman Lifetime Award on the XXIV. International Conference on Raman Spectroscopy (ICORS 2014) in Jena. Despite this latest award, Wolfgang Kiefer received several more prestigious awards. Here, we would only like to mention the Pittsburg Spectroscopy Award and an Honorary Doctor degree from the University of Cluj-Napoca, Romania.

Although Wolfgang Kiefer is celebrating his 75thbirthday, he is still “infected by the virus Raman spectroscopy”. In the basement of his house in the city of Eisingen he established a small but fine Raman lab he calls “Eisingen Laboratory for Applied Raman Spectroscopy” where he performs research work he always wanted to do but had no time for. Thus, for Wolfgang Kiefer Raman spectroscopy was not only his profession but also his hobby.

We hope that you will enjoy reading this 25th Anniversary of Asian Journal of Physics, which is dedicated to you.

Dear Wolfgang we wish you a happy 75th birthday and lots more exciting research results from your Eisingen Laboratory for Applied Raman Spectroscopy! But most importantly we wish you good health, long life and prosperity in the circle of your family!

Jürgen Popp and Michael Schmitt on behalf of all authors and the editorial board of AJP.

In this work, we describe a method to encapsulate optical gratings with nanoporous Al2O3. The encapsulation process consists of covering a grating, filled with a sacrificial material, by an organic-inorganic thin alucone layer. The element is than heated upto 400 °C to remove the organic component from the alucone film. The nanoporous Al2O3 film, formed after the removal of the organic component acts as a diffusion layer for the decomposition products of the sacrificial material. The complete removal of the sacrificial material was confirmed by energy dispersive x-ray spectroscopy (EDX). © Anita Publications. All rights reserved.
Keywords: Optical gratings, Energy dispersive x-ray spectroscopy (EDX).

Ruthenium complexes containing a 4H-imidazole chromophore feature a spectrally extremely broad absorption in the UV-Vis and near IR spectral range. In addition, those complexes show a notable redox activity and high chemical stability. These important characteristics render these systems promising for electron storage and inter-molecular electron transfer. But in order to improve the function of electron transfer or storage by modifying the structure, photo-induced structural changes and charge transfer processes with the molecular functionality need to be correlated. This includes also a fundamental understanding of relevant photo-excited states, complex stability and reaction pathways, particularly for multiple electron transfer steps in order to identify parasitic processes, which delimitate the functionality. However, the reactivity and short lifetime of electronically excited complexes renders the detailed spectroscopic characterization cumbersome. In this contribution the combination of spectroscopic tools with the electrochemical preparation of single and double reduced states is used to model the long-time behavior of photo-activated complexes. Specifically, UV-Vis and resonance Raman spectroscopy is performed to investigate a four times quasi-reversible reducible ruthenium complex and the results are analyzed using computational methods. © Anita Publications. All rights reserved.

2D correlation spectroscopy is a useful technique for analyzing chemical reactions. We studied the acid catalyzed dehydration of 3‑octanol at 150 °C with FT‑Raman, FT‑ATR‑IR and 1H‑NMR and evaluated the use of 2D correlation spectroscopy in particular the correlation of spectroscopic data from different methods with one another. This 2D hetero correlation approach proved to be useful in validating the signal assignment but otherwise limited in use. We could also show that all four possible octene isomers are forming over the course of the reaction. © Anita Publications. All rights reserved.

Generally, isotopic effects are of minor importance in standard vibrational spectroscopy, this is in particular the case, if the signal originates form a macroscopic sample. Consequently, an average spectrum with respect to the natural isotopic redundancy is obtained. However, for state-of-the-art high-resolution techniques, e.g. surface-enhanced Raman spectroscopy, where only a small number of molecules (or even merely a single molecule) are the focus of the exciting beam, isotopic effects can have a considerable influence on the spectral pattern. Here we present a computational study investigating such isotopic effects on the Raman spectrum for the 13C isotope in the thiophenol molecule. Therefore, the Raman spectra of all four possible singly 13C doped species are calculated at the density functional theory level of theory and compared to the undoped thiophenol reference spectrum. The impact of 13C substitution on the vibrational frequencies as well as on the Raman intensities is rationalized. In particular large effects are determined for the in plane vibrational modes, while each of the five calculated species (one undoped and 4 singly doped) features a unique Raman intensity pattern. © Anita Publications. All rights reserved.

As-prepared and heat treated heavy metal binary system of bismuth oxide with classical glass forming oxides were investigated with respect to their ability to form vitreous structure in the composition range of sillenite. For this high ratio of bismuth to classical glass former cation Bi/M =12 (M = Si, Ge or B), the X-ray diffraction analysis of as-prepared samples points out δ-Bi2O3 nanocrystalline phase separation, while FTIR and Raman spectroscopic analysis provide typical features for the vitreous state, with no feature of crystalline phase. After heat treatment Bi12MO20-δ sillenite crystalline phases are identified in all samples, and the structural changes induced by sillenites development are clearly revealed in FTIR and Raman spectra. A new attempt for structural units assignment based on analysis of vibrational spectra recorded from heavy metal bismuthate glass-ceramic systems with classical glass forming oxides is presented. © Anita Publications. All rights reserved.

Dedicated to Professor Wolfgang Kiefer on the occasion of his 75th birthday.

We present a theoretical study of time-resolved four-wave mixing (FWM) spectroscopy on a model system describing coupled electron-nuclear dynamics. Changing the parameterization of the Coulomb-interaction, two situation can be created. In one case, the Born-Oppenheimer adiabatic approximation holds. In adjusting the pulse sequence it is then possible to separately monitor ground state and excited state vibrational wave-packet dynamics. In the second case, strong nonadiabatic coupling is present so that the separation of ground- and excited state nuclear dynamics becomes difficult. To investigate details of the dynamics and its relation to the spectroscopy, we compare FWM-signals obtained from an exact numerical calculation to those obtained within the adiabatic approximation. © Anita Publications. All rights reserved.

The accuracy of the M06L DFT method in the prediction of the vibrational Spectra of 4-amino-2-chlorobenzonitrile:A detailed interpretation of the Molecular Structure and vibrational IR and Raman spectra and other molecular properties using several DFT methods

a Nofima AS – the Norwegian Institute of Food, Fisheries and Aquaculture Research, PB 210, N-1431 Ås, Norway.

The accuracy of the M06L DFT method in the prediction of the vibrational spectra of 4-amino-2-chlorobenzonitrile molecule was tested and compared with that of the B3LYP method. Its experimental FT-IR and FT- Raman spectra in the solid state were recorded at room temperature, and the bands assigned with accuracy by comparison with the results obtained by different methods, including MP2 and DFT. The FT-IR spectrum in Nujol mull was also recorded and analyzed. Several scaling procedures were used and several recommendations were presented. The wavenumbers of most of the modes were found in the expected range and the error obtained was in general very low. The thermodynamic parameters were calculated and discussed. The NBO analysis was done and Molecular Electrostatic Potential (MEP) was plotted. The calculated HOMO and LUMO energies showed that charge transfer occurs within the molecule. Several general conclusions were deduced. © Anita Publications. All rights reserved.

The accuracy of the M06L DFT method in the prediction of the vibrational Spectra….pdf