Investigation and study of the properties of light has given birth to numerous applications of light encompassing various aspects of our lives and our environment. Study with light in last 50 years, after the first laser light sources became available to the scientists, the field of optics has seen tremendous progress. Light based technologies have contributed immensely in the service of the mankind. Recognizing this, UNESCO has declared the year 2015 as the International Year of Light and Light Based technologies (IYOL 2015). Asian Journal of Physics has taken an initiative to bring out special issues to celebrate IYOL 2015. We are glad to be associated with this effort as Guest Editors of this special issue on Optical Metrology and Sensing which is dedicated to Prof R S Sirohi, an internationally recognised name in the area of this special issue.

Metrology with light has always played an important role in Science and Engineering. Light based techniques/ technologies have some inherent advantages such as being noncontact, non-invasive, full field and very precise. Metrology of a standard meter by Michelson and ‘sensing’ of ‘aether’ by Michelson and Morley using the famous Michelson’s interferometer are examples of classic experiments of great precision achievable by light based techniques in the 19th century. Use of lasers as a light source in classical experiments has increased the scope, range and sensitivity of optical metrology and sensing. Laser based technologies are expected to play significant role in measurement of time, gravitational waves, bio-medical imaging and measurements and many other associated technologies.

When I received a request from Professor Vinod Rastogi to write the foreword to the special issue at hand, it did not take me a second to give my reply in the affirmative. My reaction was instantaneous because I felt that this was an opportunity to express my appreciation for not only the seminal contributions in optics that Prof. Rajpal Singh Sirohi has made but also to some of the personal traits of his life which are largely unknown to many. I have known him for the past 53 years and it is impossible to detail my impressions of him in a few sentences. At best I can give only some glimpses within the framework and the space that a write-up of the present nature can accommodate.

For recollecting some of the facts, I allowed my memory to go back in time to our student days first in Meerut College Meerut (U.P.) then affiliated with the Agra university, and then to our stay in IIT Delhi. During our Masters program (1962-64) in Meerut, Rajpal was a unique personality in that he unlike most classmates, stayed aloof, always engrossed in his thoughts. We used to call him a ‘philosopher’ because he would often discuss with the teachers some intricate problems in physics. Also, he led an extremely simple life so that he could concentrate fully on his studies. If we could identify one person in the class who spent the maximum time in the laboratory, it was Rajpal. I can not claim that I was his friend during our Masters program because he always maintained certain distance from the classmates except one whom he had known since his school days. A part of the reason was also the fact that I used to stay in the college hostel while he stayed in the city, thus minimizing our interaction. I was a close competitor of his but he scored over me when the final result was declared. He came out as the topper in the class while I came a close second !

Our intimacy grew only when we came to IIT Delhi in 1965 for our Post-M.Sc. program in Applied Optics. Since we were only five students in the class and four of us were residents of the same floor in a hostel, the interaction was quite intense. It was here that I came to know more about his personal traits as also his dedication towards his studies. Being an early riser, I used to go to the washroom early and for that I had to walk past his room in which I used see the lights switched on even at as early as 4.00 AM or so. Lo and behold, he used to be at his study table in the ‘Brahm Muhurt’ ! Sometimes on Sundays or holidays, we used to trek to Qutub Minar through the rocky region that the place was way back in 1964. We also came somewhat closer and could share with each other our moments of disappointment as also those of elation. A more detailed account of our student days at IITD is given in articles elsewhere [1,2].

Even after he left to join IISc Bangalore as a Scientific Officer and I stayed back at IITD, we kept in touch with each other through letters. After he settled down at IIT Madras as a faculty member, our interaction increased considerably because our interests in optics had considerable overlap. Whenever I visited Madras, I had opportunity to stay at his residence where Mrs Vijaya Laxmi Sirohi played a generous and wonderful host. Likewise when he came to Delhi, he stayed with us and would always call my wife as Bhabhijee with much respect. Due to the nature of our professional careers, we kept in close touch with each other through participation in conferences and other meetings. We remained friendly competitors throughout our careers.

I would restrain myself from enumerating his outstanding professional achievements because these can not be capsuled in a ‘Foreword’ which can provide only a limited space. During Professor Sirohi’s tenure (2000-2005) as Director of IIT Delhi, his acumen as an administrator came to the fore. He dedicated himself wholeheartedly to affect several reforms to make the IITD campus a better place to live in. This and several other aspects of his career are described in detail in an article [2] elsewhere. During my tenure as Dean Postgraduate Studies and Research, I had to attend many meetings where I observed closely his ability to lead meaningful discussions to arrive at just and logical solutions to the problems. He is a firm believer in the theory that it is only through the character building and practice of ethical practices that the country can move forward in the field of education as also in other spheres of life.

Professor Vinod Rastogi deserves our heart-felt gratitude for having taken initiative to bring out the present special issue of the Asian J.Physics in the year 2015 which is being celebrated the world over as the UNESCO sponsored ‘International Year of Light and Light based Technologies’. Through this issue some of the admirers, former students and former colleagues have got an opportunity to express their admiration for Prof. Sirohi by dedicating their articles in his honor. I may add that many special issues of the journal brought out due to the hard work and dedication of Prof. Rastogi have been very well received by the optics community in India and abroad. It is due to his sheer determination that so many prominent authors from India and abroad have contributed articles to these special issues.

Professor Sirohi has mentored and inspired three generations of students, and still continues to be active in spreading the knowledge of optics. He has been a role model for many researchers and it is only in the fitness of things that the present issue on ‘Optical Metrology and Sensing Techniques’ guest edited by Prof. M P Kothiyal, Prof. Chandra Shakher, and Dr.N Krishna Mohan, has been dedicated in his honor. May Prof Sirohi be blessed by the Almighty so that he continues to enjoy good health and carry on with his passionate pursuit of knowledge!

I also wish to thank Prof. Rastogi for having invited me to write the ‘Foreword’ to this special issue. I wish him many more years of dedicated service to the cause of physics in general and optics in particular, by way of dissemination of information. May the Almighty keep him in good health and best of spirits!

[1] Kehar Singh, Optics and Photonics at IIT Delhi ; Past and Present, in ‘FOP-11: XXXVI OSI Symp.on Frontiers in Optics and 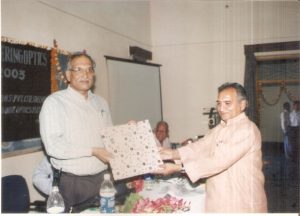