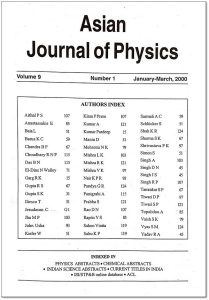 The force field calculations for planar modes of flurobenzene have been revisited using more accurately observed values of fundamentals [J Mol Spectrosc, 73 (1978)290] of parent molecule and its two deuterated analogues namely, flurobenzene –p-d and –d5. A 38 parameters force field has been determined leading to alteration of the earlier vibrational assignments for some of the normal modes. The doblet observed at 2274.4 and 2304.4cm-1 as A type IR bands for p-d fluorobenzene could be explained as arising due to the Fermi resonance between the (C-D) fundamental and the first overtone of the CHplanar bending mode observed at 1156 cm-1. Three force constants for the stretching of the c-c bonds of the ring have been taken in view of the C2v symmetry and similarly, 3 force constants for the CH stetchings and the bendings and 4 force constants for the planar ring bendings have been taken . It is found that the force constants involving different C-C bond stetchings vary within 2%, those involving CH strechings and bendings vary within 1% and 7.5% respectively . However, the force constants involving the ring bendings show rather a large variation of 28%.

Raman and IR spectra of 99.5%[xB203(1—x)Bi203]0.5%Fe203 glasses with different Bi/B nominal ratios (0.20 ≤ x ≤ 0.80) have been investigated. The influence of bismuth atoms on the vitreous B203 network as well as the local order changes both around bismuth and boron atoms are studied. The very low content of Fe203 introduced in these samples has no structural effect on the bismuth-borate glass matrices as far as evidenced by the methods used.

Nonlinear absorption properties of Bi12SiO20 (BSO ) crystal are studied using single beam Z-scan technique in the nanosecond regime without applying external electric field. We observed a strong nonlinear absorption at 532 nm (SHG of an Nd: YAG laser) and at 595nm (Nd:YAG pumped dye laser) . We have also studied the optical limiting and the laser damage threshold of the crystal at both the wavelengths.  A physical model is developed to explain the observed behavior using photorefractive properties of BSO crystal which incorporates the accumulative trap assisted excited state absorption and the instantaneous two-photon absorption which makes it as an excellent optical limiter.